Roughly 27 years, 5 months and a couple of weeks ago (but who’s counting?) we spent some time in London, Cambridge, Stratford-upon-Avon, Florence, Italy, and Paris… I think that’s in France. They seemed like good places to celebrate my 40th birthday. That happened in Florence, although upon reflection it just meant that age 40 hit me 5 hours earlier than it would have otherwise. But I haven’t noticed any ill effects. So far.

Now, all this time later, we’re planning yet another excursion overseas, which brings back a lot of old memories. Not so much of London, Florence, et. al., but of days and parents gone by.

My parents traveled extensively, especially in retirement, but without ever leaving the United States, and rarely by anything but car, van or trailer. There was enough for them to see right here, at least if you include Hawaii and Alaska, which they did. We’ve seen several states, from Cape Cod to San Francisco and Seattle, but we’ll save any more than that for when we’re too old, timid and confused to venture overseas again. Which will probably be sometime next month. 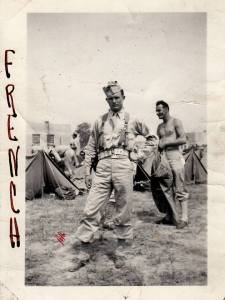 My dad caught the tail end of WWII, ya know the Big One, as Archie Bunker used to say. He was stationed in Italy, guarding the Allied end of a bridge while Soviet troops guarded the other end and artillery sailed overhead toward enemy holdouts. He and a buddy decided to take a Jeep and cross the bridge to shake hands with the commies, but thought better of it when the Russians declined to let down their guard and offer a big welcome. So Dad and his buddy spun a U-turn and headed back to safety, rather than risk getting shot– after the war was already over.

Beyond that neither of my folks never had any interest in travel beyond U.S. borders.

They picked us up at Detroit Metro when we came back from two weeks of fun and adventure in Europe. We climbed into the back of their car and they were polite enough to ask us how the trip was, and we enthusiastically started up with some amusing anecdotes of the wonders we’d seen and experienced– we did not travel with a tour group, we did it all out our own: two innocent kids sussing out the train schedules and finding our way to hidden hotels in unfamiliar lands where they didn’t speak our language, especially in England. To their credit, my folks let us ramble on for five minutes or so, before Mom said, “well, nothing new here, not much was going on,” then they proceeded to relate everything that didn’t happen in our absence for the rest of the hour-plus drive home. Europe and our experiences were obviously of no interest to them. *sigh*

Which brings me to the point of this tale, the advice given to us by a friend many years ago. She said when you come back from a fabulous vacation and someone– family or coworkers– ask how your vacation was, you have 20 seconds to tell them it was great… and you’re done. Shut up. Move on. They’re no longer listening. Good advice, which I will follow, as I pretty much always have. But that’s not to say I might not write about it here. If there’s anything to say about a couple days in Munich, a couple more in Salzburg, and eight days on the Danube from Passau to Budapest. Well, maybe something interesting will happen with customs or the TSA. It usually does. We’ll see.

This site uses Akismet to reduce spam. Learn how your comment data is processed.